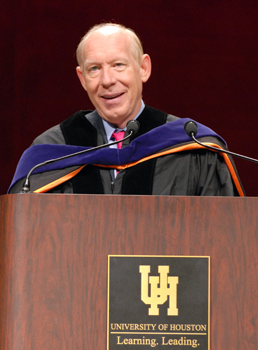 A three-term mayor of America’s 4th largest city, White is recognized both locally and nationally. First elected in 2003, White won two reelections by overwhelming margins –91 percent and 86 percent – and left office in January 2010 due to the city’s term limits as one of Houston’s most popular public figures.

Americans witnessed his hands-on management style when he helped lead Houston’s response to Hurricane Katrina in 2005. He was later awarded the John F. Kennedy Profile in Courage Award and rated Governing Magazine’s Public Official of the Year in 2007 for his service in the light of the catastrophe.  White’s leadership was also credited with helping the Houston area prepare for and respond to Hurricane Ike in 2008.

Before serving as mayor, White was a prominent businessman and served as the deputy secretary at the U.S. Department of Energy during the administration of former president Bill Clinton.

“We started this spring’s alumni breakfasts with the CEO of Anadarko, Mr. James Hackett, and we end it with former City of Houston Mayor Bill White.  The caliber of these individuals and their participation in these breakfasts is a testament to our alumni’s influence,” said Jerry Portele (BS ’96), second vice president of the Bauer College Alumni Association and event chairman.

The BCAA breakfast series is held each fall and spring semester. Networking and breakfast begin at 7 a.m. with scheduled adjournment at 8:30 a.m. Cost is $30 ($25 for UHAA members) and is open to the public.