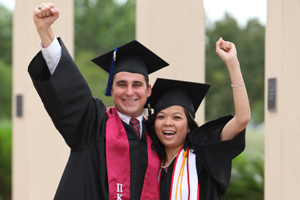 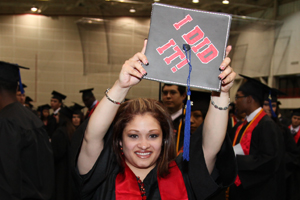 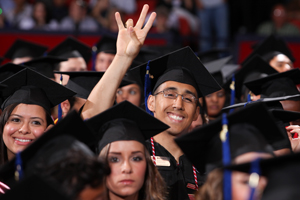 The sky is the limit for these graduating Cougars from UH Bauer, said UH President Renu Khator.

Graduating students from the University of Houston C. T. Bauer College of Business joined an exclusive group on Friday – the 1 percent of people in the entire world who have a college degree.

UH President Renu Khator emphasized that point in her address to graduates at the Spring 2010 Commencement Ceremony, held May 14, 2010, in Hofheinz Pavilion.

“You are the pride,” she said. “You are very special. You can change the world, influence the world and make an impact.”

UH Bauer graduated more than 800 students, including doctoral, MBA, masters of accountancy, masters of finance and undergraduate candidates. The students become alumni at a very important time in the university’s history, Khator said.

Overall enrollment is at an all-time high, as is the depth and breadth of research being done on campus, she added. “The university has a $3.1 billion ― that’s with a ‘b’ ― economic impact on this region every year,” Khator said. “All of this adds value and prestige to your degree.”

UH System Board of Regents Chairman Welcome W. Wilson Sr. (’49) shared his story of success as both a student and an alumnus with graduates, recalling his junior year at UH more than six decades ago and meeting then-chairman Hugh Roy Cullen.

“I went back to my dorm and saw my brother sitting there… I told him I could be (Board of Regents) chairman one day,” Wilson said. “I’ve thought of Mr. Cullen many times since then and what an inspiration he was to me as a student and now.”

Smith, who died last year, was the youngest daughter of Hugh Roy Cullen and Lillie Cranz Cullen, UH’s founding family and first major benefactors.  Inspired to make a substantial commitment to education and the community, the Cullens also created The Cullen Foundation, one of the largest individual endowments ever funded in the U.S. at the time. With her first husband, Corbin J. Robertson Sr. (whose name graces the university’s sports stadium), Smith was a strong advocate of Cougar athletics and the University.

UH history and tradition was a big part of the Spring 2010 UH Bauer Commencement Ceremony as Wilhelmina Daisy Cullen Robertson Smith (’44, HON ’88) was awarded a posthumous President’s Medallion, accepted by her family.

“Mom did love to attend those games and spent the whole time, in total focus, with both fingers crossed,” Ray said. “The University of Houston was such a big part of Mom’s life. She was dedicated and determined always to the success of UH.”

Several members of the Cullen and Robertson families were in attendance at the ceremony to accept the President’s Medallion with Ray.