Program for Excellence in Selling Team is #1
in the U.S. at National Collegiate Sales Competition

A team of four students from the Program for Excellence in Selling at the University of Houston C. T. Bauer College of Business placed first in the U.S. recently at the National Collegiate Sales Competition held at Kennesaw State University.

Held in early March, this year’s competition boasted teams from more than 60 of the top graduate and undergraduate sales programs in the nation, with the UH Bauer team taking the top spot. The team consisted of competitors Rebekah Elliott and Taylor Herbert and team alternates Jozette Bionat and Adrian Sese, all marketing students in Bauer’s Program for Excellence in Selling.

“We’re ecstatic to bring the NCSC trophy back to UH Bauer for the Program for Excellence in Selling’s 15-year anniversary, and we’re honored to have been chosen to participate in this remarkable competition,” Elliott said. “This is an extraordinary time for the University of Houston, and we are grateful to be a part of it.”

The competition required students to prepare a sales presentation for a mock meeting with a buyer lasting 20 minutes, as they were recorded and graded by a judging panel on criteria such as needs identification, approach and communication skills.

The skills taught in the Program for Excellence in selling gave the UH Bauer team an edge, Elliott said.

“In the competition, we had to utilize every aspect of what we’ve learned within PES,” she added. “After completing such an extensive sales curriculum, any PES student would not only be prepared to come in first at NCSC but also to be competitive in any sales profession.”

PES Clinical Professor Amy Vandaveer, who teaches Professional Selling and the career preparatory lab for the program, has coached the NCSC teams from Bauer for the past three years. The drive and ambition of this year’s team was there from the start, she said.

“We are so proud of all the hard work the students put into preparing for the competition,” she said. “Their dedication and commitment to bringing home the win for UH was evident from the beginning.”

The live selling experience students gain through the PES curriculum was integral to the team’s success, Vandaveer said, giving them the ability to think on their feet and pull from real world experience. 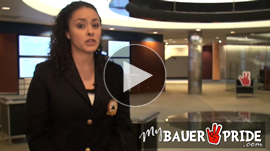 Click here to watch a video about the #1 PES team!

“It’s a competition that has a game element to it, but there are two key components that allowed the students to succeed — finding a way to develop a relationship with the ‘buyer’ and being able to quickly identify their needs,” she added. “These two aspects of sales are what PES does better than any other program in the nation.”

“The fact that UH was the only participating university to have both competitors reach the semifinals speaks volumes not only to the hard work of the individual students, but also to the effort of their teammates and the overall quality of education provided by the Program for Excellence in Selling,” he said.

The students filmed their practice sessions for critiques and spent time working with the NCSC team from 2010, who were semi-finalists in the competition.

“PES has truly given me the ability to develop into the person I am today,” Herbert said. “The program gives you an opportunity like no other, from the extensive curriculum, to the opportunity to learn from the best sales professionals out there. I’m very proud to be part of PES and to represent UH Bauer at NCSC, bringing home first place!”